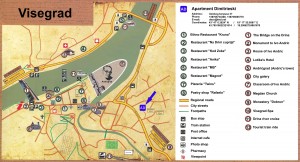 Višegrad is the capital of the Višegrad municipality in eastern Bosnia and Herzegovina on the Drina River. The city has a population of 6,000, and the municipality has 23,200 inhabitants. It is located in a large valley of the Drina River, on the hilly slopes that gently rise in the high mountains over 1000 meters high. The Višegrad valley is only one of the few valley of the Drina River, which usually consists of the high cliffs and mountains. At the point of entrance to the wide valley, a 500 year-old stone bridge is located with its 11 wide range arches, known to everyone by several names “Bridge on the Drina”, “The old bridge”, or by its official name “Mehmed Paša Sokolović Bridge”. This Ottoman-era bridge is an UNESCO world heritage site which was popularized by Nobel prize winning author Ivo Andrić in his novel “The Bridge on the Drina”. Andrićgrad, a future tourist site dedicated to Andrić, is under construction near the bridge. 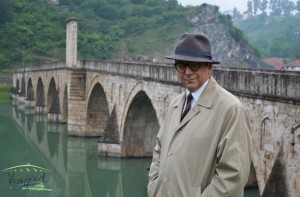 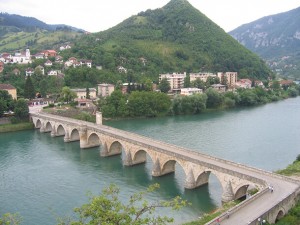 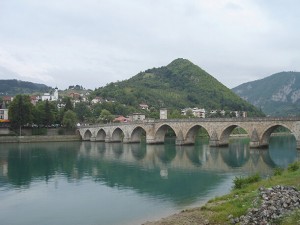 The Mehmed Paša Sokolović Bridge is a historic bridge in Višegrad, over the Drina River in eastern Bosnia and Herzegovina. The bridge was built in the period from 1571 to 1577 by the Ottoman court architect Mimar Sinan on the order of the Grand Vizier Mehmed Paša Sokolović. It was built in the oriental style and is a masterpiece of that era. It is characteristic of the apogee of Turkish monumental architecture and civil engineering. It numbers 11 masonry arches, with spans of 11 to 15 metres, and an access ramp at right angles with four arches on the left bank of the river. The total length is 179.5 m, height above the normal water level of the river is 15.4m, and the width is 6.3m meters. In the middle of the bridge a stone sofa was built, to provide place of rest to the tired passengers.

UNESCO included the facility in its 2007 World Heritage List. The UNESCO summary states: The unique elegance of proportion and monumental nobility of the property as a whole bear witness to the greatness of this style of architecture. 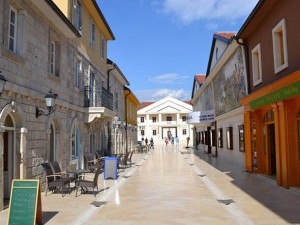 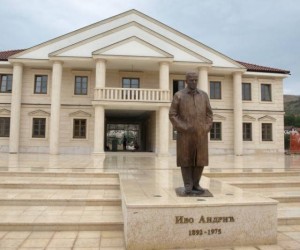 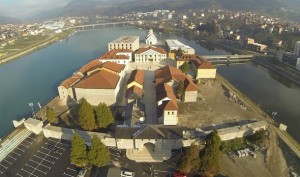 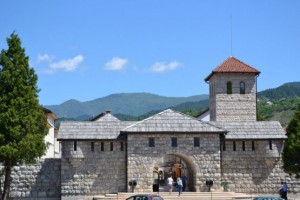 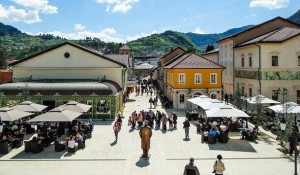 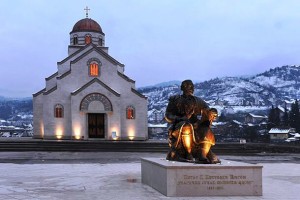 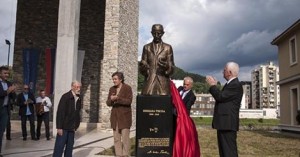 Andrićgrad or Stonetown is a city, cultural center and ethno village situated on a peninsula between the rivers Drina and Rzav 300 meters from the Višegrad bridge.

Andrićgrad is an ongoing project of the famous movie director Emir Kusturica whose idea is to build a stone medieval city inspired by the works and characters of Ivo Andrić. The town represents a vision of how Višegrad could have looked like if it hasn’t been overlooked by the Renaissance and other historical periods. In architectural terms, the city itself is a mixture of different eras and styles which have changed through the history of this area: Byzantine style, the Ottoman period, the Renaissance, and the classicism.

While walking through the main street visitors will be able to return to the past. To quote Emir Kusturica: “The street practically blends two periods – fragments of Renaissance with Ottoman and Byzantium period. At the entrance a caravanserai (a roadside inn) faces the Byzantine palace. Next, the person encounters the buildings Austrian Empire could have built, but didn’t, just like the Ottoman Empire built the things that weren’t supposed to be build. At the end of the street, towards the main square built in the kind of classicism which supposed to be built between two world wars, the buildings are a part of the Renaissance period which could have been built by the Austrian Empire.” 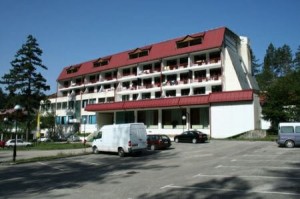 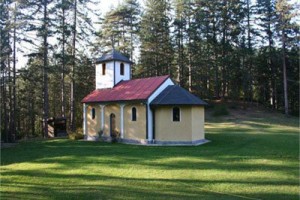 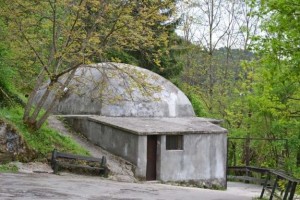 The Visegrad Spa is located 5 km to the north of Visegrad. It is located in a pine forest at an altitude of 414 m. Because of its altitude and the natural environment and has features of an air spa. Thermal water of the Visegrad spa has a property of a radioactive carbonate homeoterm, and its temperature is around 34ºC. The main medicinal properties of the water come from its radioactivity, created by radon and its decay products. By the degree of radioactivity, the Visegrad spa is ranked first in Bosnia and Herzegovina and second in the former Yugoslavia. Radon reduces pain, increases overall immunity, and has a beneficial effect on some endocrine glands, and respiratory and allergic diseases. The water is used to treat rheumatic diseases, neurological conditions, orthopedic diseases and deformities, gynecological diseases, respiratory diseases, geriatric diseases.

The spa has two main buildings. The new building (upper spa) is a rehabilitation center with a pool open for public, while the old building (lower spa) features a Turkish bathroom (hamam) also open for public and a restaurant terrace surrounded by pine forest. If you are visiting Višegrad during the summer when the restaurant is open, we highly recommend a visit to this place. Also, a church of St. John is located nearby on the glade in the forest and it is a very quiet place suitable for a picnic. 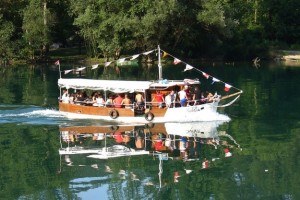 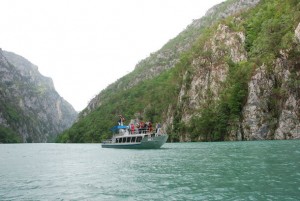 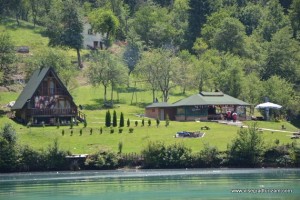 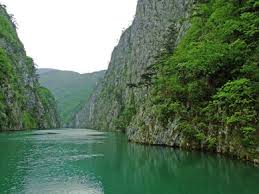 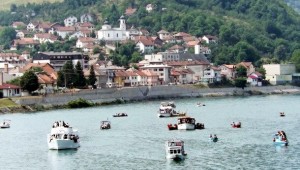 After visiting Visegrad and its sights, you can complete your Višegrad experience if you decide to cruise on the Drina river, with one of the tourist boats in Višegrad.

Downstream of the Visegrad there is a canyon of the Drina River, the second largest river canyon in Europe. In the past, Drina was known as a wild and dangerous river. However, after the construction of the hydroelectric power plant “Bajina Basta” this part of the Drina was turned into an artificial lake 54 km long.

Individual tourists can join the groups for a cruise, and there is a possibility to rent small boats for small groups of up to 10 people. If you want a short 60 minutes boat trip on the river Drina, you have the option of renting a large tourist boat for groups up to 40 people. Groups from 2 to 10 people arrange a cruise on a smaller vessel. The cruise usually includes a tour of the famous bridge and a ride few kilometers downstream from Visegrad. Although there are several standard cruising offers and tours, boat owners are usually open to some changes on customer request. 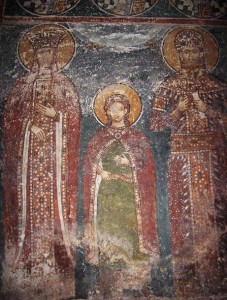 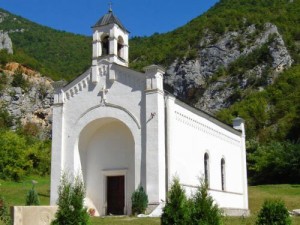 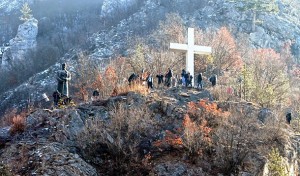 The Dobrun Monastery, also known as Kruševo, located in the picturesque mountainous region on the road Višegrad-Užice, 12 km from Visegrad in the gorge of the river Rzav.

It is dedicated to the Annunciation and was erected by the prefect Pribyl and his sons Stefan and Petar in 1343. In the year 1383., Petar now a monk named John, built painted a narthex. In 1393, when the Turks invaded Bosnia for the first time, the monastery was destroyed. It was then renewed by Despot Stefan Lazarević and Princess Milica. Somewhere on the border of 18th and 19th century monastery was deserted. There is no reliable data about the origin and early history of the monastery. It is known that at one time it was the seat of Metropolitanate.